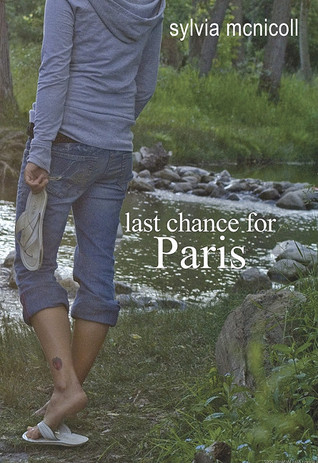 
Fourteen year old Zanna has been sent out to the wilds of Alberta to spend the summer with her father (a geomorphologist) and her twin brother Martin. Meanwhile her mother (an artist) is living the life in Paris, Zanna has to adjust to a disconnected life of no internet and being separated from her boyfriend Zane. To keep the twins busy while he studies the glacier, their father arranges for them to volunteer for Parks Canada. Zanna and Martin are paired up with a young ranger named Tyler and they are assigned the task of picking up trash along the trails. One day Martin goes off alone and doesn't return home. A search party is formed, but Zanna knows that Paris (the over-sized puppy they found, who resembles a wolf) is the only hope they have to finding her brother.

Being forced to leave a boyfriend behind in the big city would upset any teenage girl and I think that the author did a good job of portraying Zanna's angst. Had I been a teenager myself, when I read this I am sure that I would have been able to empathize more with her. I thought that the connection Zanna and Martin had with the puppy Paris was cute. However I found it hard to believe that the father (a man who makes his living out in the wilderness) wouldn't question the fact that the dog was indeed a wild animal. There were times throughout the book that I felt there were holes in the story. Like for example the relationship between the parents. Its not until late in the book that we learn they were never really married at all. It seems sadly clear that the mother was only concerned about her own affairs, but why doesn't the father try to intervene or stand up for his children in some way? The possibility of the father working for a development company was brought up and I thought it would play more into the plotline, although it wasn't really discussed with the exception of a brief mention. Another part I would like to add is that the entire book really only spanned a few days; from their arrival in Last Chance Pass to the end of the story, which made it feel very rushed.

Despite these points, there were aspects of Last Chance for Paris that I liked. For example the twin connection between Zanna and Martin. Even after so many years apart, their bond was everlasting. The setting itself was my favourite part about this book. The descriptions of their beautiful rugged surroundings stole the show. It made me long for camping; staying in a small cabin on the lake, smelling the fresh mountain air and hiking the trails.

I would recommend this book to young adults who enjoy a bit of adventure.
Posted by Melissa Lee at 11:11 PM