The Day the World Came to Town: 9/11 in Gander, Newfoundland by Jim Defede 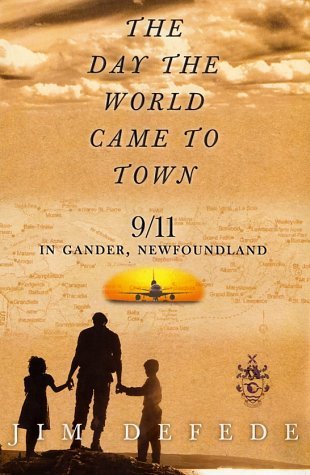 On September 11, 2001 the world as we knew it was forever changed in the event of the terrorist attacks on the United States. At the time of these attacks there were a large number of planes in flight heading toward different cities in the country. 38 of these planes, their crew and its passengers were diverted to the Canadian province of Newfoundland. More specifically, the town of Gander in the central area of the island. In Defede’s The Day the World Came to Town, he tells of the experiences the “plane people” had and the locals who accepted them with their warm Newfoundland hospitality.

A Different Perspective:
Since the tragic events of that day over 14 years ago, I have heard many different accounts from survivors, witnesses and citizens but not much about those who were stranded. Defede’s book is unique in that it shines a light on situations pertaining to that day, which many people haven’t heard about.


Gander and the Plane People:
In a short time, 6,595 people were diverted to Gander a town which at the time had a population of less than 10,000. There were so many people that the surrounding communities of Appleton, Gambo, Lewisport and Norris Arm opened their doors to those who were stranded as well.

No Price Tags
I enjoyed how Defede took time to give some background information on Newfoundland as a province and the importance of Gander International Airport in aviation. The famous Newfoundland hospitality really speaks for itself. This book describes how Newfoundlanders donated everything from towels and bedding to clothing and even the use of their own bathrooms, to make sure their unexpected visitors had everything they needed. As an old song goes: "There are No Price Tags on the Doors of Newfoundland"


For the better part of a week, nearly every man, woman and child in Gander and the surrounding smaller towns stopped what they were doing so they could help. They placed their own lives on hold for a group of strangers and asked for nothing in return.
-Jim Defede Pg. 7

Relations
This book is educational in that it shows how different people react in serious situations. Preparations needed to be made to ensure that all the diverted planes landed safely. Security and customs officials had to process thousands of people. And the townspeople had to prepare to take in these stranded passengers. This topic is important in that it shows a strong friendship between our (Canadian and American) two countries. When one country is in crisis, another stepped up to offer aid.

If the terrorists had hoped their attacks would reveal the weaknesses in western society, the events in Gander proved its strength.
-Jim Defede Pg. 7

Reading this book made me even more proud of my own Newfoundland heritage. I would recommend this book to those who are interested in Canadian-American relations and those who enjoy reading nonfiction.