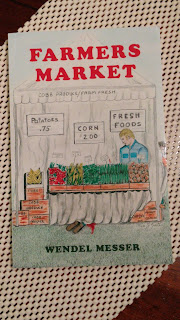 I received a copy Farmers Market by Wendel Messer, in exchange for an honest review.

When a murder occurs in cottage country, a retired investigative duo are called in to solve the crime. Richard Hitchens created what is described as an umbrella organization for farmers markets. Meanwhile his enemy; a Cornelius Cobb (a produce re-seller) takes over as president of the farmers market in the town of Gravywurst. His corrupt practices have pushed out the local farmers in favour of more mass produced and genetically grown industrial crops. In come Tiger Cohen a Sherlock Holmes of sorts and his “Watson”, Willy Fassbender. Their task is to piece together the events on the night of a pig roast where Hitchens drowned in the nearby river.

As I began reading Farmers Market, I was pleasantly surprised by the familiar feel to the style of writing. It was like being reunited with a long lost friend, even though this is the first book I have read by this author. This feeling was due in part to the references to Sherlock Holmes and his investigative style. I immediately felt the connection between Cohen and Fassbender, mirroring that of Sir Arthur Conan Doyle classic characters.

Marketed as a crime/humour novel, the satire aspect was clear as day to this Ontario born girl. Wrote with a supposed New York state setting, town names like “Gravywurst”, “Braceburg” and “Muskaga” made me laugh out loud. For those not familiar with Ontario geography, Messer’s play on words translate to Gravenhurst, Bracebridge and Muskoka: cottage country. Another aspect of the satire was in the way the corrupt farmers market directors and those involved with the genetic and industrial farming, talked. I could just picture them all manically laughing as they take over smaller farms and controlling the world’s food supply.

This story kept me interested throughout and I enjoyed the beautiful setting. Unfortunately I felt as a reader that I wasn’t given a really clear picture of the murder victim as it was buried in the political corruption of the farmers market and the state of agriculture.

Farmers Market, really opened my eyes to the state that the food that we are being fed. I am ashamed to admit that I haven’t given it much thought before now. Sure I have heard of genetically modified food and industrial farming, but I didn’t make it a personal priority to investigate more, or make better choices. This lack of knowledge on my part left me feeling like some of the agricultural terminology was over my head. However I hope that what I have learned by reading this book will have a positive impact on my future choices.

I would recommend Wendel Messer’s Farmers Market to those who have an interest in social justice and agriculturally focused mysteries.
Posted by Melissa Lee at 12:26 AM